When I was born we lived at 13 Castle Road, later we moved in with my mum’s mum, my nanny Bigham when she got a new house in St Margarets Road until we got a house round the corner in St Andrews Road where we lived until 1964 when we emigrated to Australia.

My mum was Myra Bigham and she had 5 brothers, Bill, Arthur, Frank, Louis and Jim. She married a Londoner Donald Swinge in 1950.

I am the oldest of their 5 children, 4 girls and the boy is the youngest. On a Saturday mum and I always went to Saltcoats shopping, for what I cannot recall but I loved it, before we caught the bus back we always went into a café and she had a tea and I had a spider, I seem to remember the café being beside or near the bus stop and had big windows or so it seemed at my age which was probably around 10 years.

My siblings and me, left to right is Janette, Linda, Carol, Raymond & Dawn. 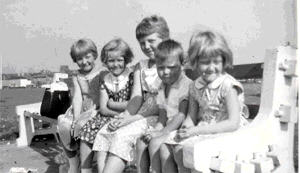 In summer we would go down to South Beach and swim and play on the putting green, we used to have so much fun then. Other times my sister and I would go down to North Beach which was all rock and pick wilkes and mum would boil them up and we would all sit down with a bowl and a darning needle my we had a feast, delicious.

I used to pick potatoes in the field near my nannies in St Margarets Road after the farmer had done his picking, we all had our tattie bags and little shovel. For some reason one time we were not allowed to pick the potatoes but we were there anyway and the police were called on us, I ran for my life and hid under my nannies front window with her looking out for me and telling what she could see, that is all I remember of that. I think not long after that they were building new houses where the fields were. 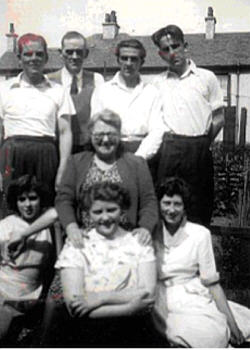 On Sunday my sister and I would go to Sunday school at the Barony Church and then go home and change to play at the burn and then walk on to the cemetery and lay some flowers at our nanny and papas grave. We also played in what we called the grave yard, why I can’t recall, I think it was at the bottom of our street somewhere, it would not have been far though, it was scary to us at that young age. The Cannon Hill, where I am sure everyone played was a great place to play and rolly polly down the hills, what a beautiful place that was, our imagination would really taken over up there.

I think this was taken at Castle Road before I was born.