I was born In 1948 in Irvine Central Hospital, Ayrshire, the second of five children, and I spent the first 19 years of my life growing up in Stevenston.

I emigrated to New Jersey, USA in 1968, and except for frequent bouts of homesickness, I've lived here happily ever since. Along the way I've managed to aquire a terrific hubby, three wonderful sons, two beautiful daughters-in-law, four healthy grandkids and at different times, 2 dogs, 2 cats, and a variety of gerbels, snakes, turtles, and goldfish. The following are a few of my earliest, (before the age of five) childhood recollections

My Ain Folk
My father, Robert (Sodjer) Miller was a builder's labourer. As far as I know, he was born and raised in Stevenston and apart from a stint in the Merchant Navy, before he married my mother, lived in Stevenston till his death in 1976 at the age of 51. I hardly knew my dad. He and my mum separated when I was barely five, resulting in me, my two sisters, and one of my brothers being raised by Granny Weaver, our mum's mum. I only saw my dad intermitently during my growing up years, but I have memories of my first five years with him, and I've loved and missed him all of my life. 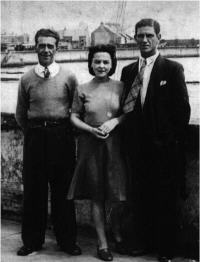 My mother's family moved to Stevenston from Glasgow when mum, Betty (Harkness) was in her early teens. She moved away a few times in the early years, after the break-up, but always returned to Stevenston, and eventually stayed, living most of her life in the house she subsequently bought from the Council in St. Monachs Place.

Pappy Weaver, Mum & Dad
She passed away in 1997 and a day doesn't go by without me thinking of and missing her. As I mentioned at the beginning, there were five children in our family. My "big" sister Betty, a year older than I. My brother John, a year younger. My "little" sister Ann, three years younger, and my "baby" brother Michael, seven years my junior. John died in 1982, taking half of my heart with him.

Before commencing any further, I'd just like to state that the following passages have been culled from my memory bank of stuff that occurred a long, long, time ago, so any resemblance to events, places, or persons living or dead, is purely......miraculous! lol!

Be It Ever So Humble
My first home was on New Street. The building was a multiple dwelling that was accessed from the street through a close. I don't remember the number, but it was directly across the road from Tognari's Cafe. Ours was the first door on the right as you entered the close. It opened into one big room with one window which looked out on to the street.
The only furnishings that I can recall were a table and some chairs. A fireplace with two round trivet things that were attached somehow to each side of the fireplace.You could sit pots on them, and swing them in over the open fire for cooking. A mirror hung on the wall above the mantlepiece and there was a single gas mantle which supplied our light. There was one recessed bed and another bed, which arrived one day amidst great excitement on the part of we kids. (I guess by the time the fourth child arrived, my parents decided we needed another bed.) I can remember someone knocking on our window and yelling to my mum to, "Come oot quick! Here comes your new bed!" I followed her out the door and stood watching as a horse and bed laden cart came clippety-clopping and rumbling down the middle of New Street. The exciting part for us kids wasn't about the new bed...no, it was that while the adults were busy manouvering the bed with all it's bits and pieces indoors, we got to pet the horse! I'd never been that close to a real live horse before. It was awesome! Love at first sight! To this day, whenever an occasion calls for me to close my eyes and make a wish, I sometimes find myself still wishing for a pony...who knows, it could come true.

Friends and Neighbours
The next door along the close belonged to our, "through the wall" neighbours, The McKillroys.(sp) There was Sally, her husband,( whose first name I can't recall) and their four kids, Johnson, Mary, Andrew and Robert. The latter two being around my age. The others, a few years older. Sally as I remember her, was big, blond, loud, and happy.... always laughing and joking...I adored her! I remember vividly the times she'd call me in as I passed her door on my way out the back to play. She'd say,"Come 'ere hen, and let me curl your hair." She would then proceed to magically transform my stick-straight hair into a mass of wringlets with nothing but a hot, from the fire, poker. I'd walk around all day feeling like a princess!
She and my mother were friends as well as neighbours. Dressed alike in their cotten peenies and head-square turbins, they'd do their laundry together, "out the back" in the washhouse with it's hand wringers and big tub that always had spiders crawling around in it..ugh!
There was also an outdoor toilet out there but we kids were never allowed to go near it. We used a chanty in the hoose, whenever we, "had to go". I remember the first time I used a flushing toilet on a visit to my Granny Miller's house, on Caledonian Road. The toilet tank was way above, and connected to the bowl by a long pipe. It had a chain-pull flusher. I thought it was magic when after using the toilet, all you had to do was yank on that chain and, with a noisy, 'whoosh!' ...everything disappeared and the bowl was good as new again. It was hard going back to the chanty after that.lol

Flight Of The BumbleBees
I know there were other kids around where we lived, but I don't recall any of their names or faces. One day, a bunch of us were out the back playing. Ours was a big back yard, it went back pretty far from the house, ending where the grounds of the Rec. (Ardeer Recreation Club) started. Most of it was left to grow wild...long grass, trees, bushes and wild flowers everywhere.  We kids loved it. it was like playing in a jungle. 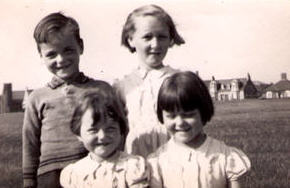 On this particular day, somebody discovered a hole or tunnel in the ground about the circumference of a soccer ball, maybe a wee bit smaller, and going down pretty deep under the ground. Everyone gathered around it to have a look, and after some discussion, we all concluded it to be a bees' nest. The fact that there were bees flying in and out of it might have had something to do with that. Next thing you know, one of the McKillroy boys, I'm almost positive it was Robert, but it could have been Andrew, picked up a wooden clothes peg off the ground and chucked it down the hole. Well, all hell broke loose after that. I remember screaming in abject terror as a black cloud of angry bees flew out of that hole and rushed right at me. Kids were screaming and running in all directions...bumping into and knocking each other down trying to get away. Mothers heard the screaming and came running.
The upshot of it all was, a single file of angry mums with hysterical kids in tow was seen marching up New Street on there way to the chemist's at the Cross, When we emerged from the shop some time later, we were a sight to behold! The chemist had dabbed our stings with a funny coloured solution. I don't know what it was, but we were all covered in purple polka dots. lol

On The Street Where I Lived
New Street was/is one of the main thoroughfares in Stevenston. A busy street for traffic, especially during shift changes at "the factory" (ICI). I can remember every night around five o clock, when the day shift ended, standing at the window and watching big red double decker buses filled to their limit with "folk comin hame fae wurk"...literally thousands of people in what seemed like hundreds of buses, bumper to bumper, moving slowly past our house on their way to Stevenston Cross, where they would either turn left towards Saltcoats and Ardrossan, or right, if they were bound for "The Tap End" of Stevenston, or Kilwinning and beyond. Then after the buses came the cars, followed by motor-bikes, (some with side-cars) and bringing up the rear were the bicycles. I loved watching them all go by!
Some of the shops I remember in and around New Street were; Mary Baillie's - Hair stylest. I think she had two places, one on New Street and later on, one on Townhead Street, across from the post office. That one was run by John Baillie. He might have been her son? It was also the place where I got my first perm at the age of 13...A disaster, which took a year to grow out!.. sob...

R.E. Evans - Infantwear. I remember coveting, (for years) the life size baby-doll that was a permanent fixture in their shop window display.
The afore mentioned, Tognari's Cafe, where my sister Betty and I used to return empty "ginger boattles" for sweetie money. And where, on my fourth birthday, my auntie Isobel scooped me into her arms and ran across the street and in through the door, and with a grand sweep of her arm, instructed me to, "Pick oot whitivurr box of chocolates ye want hen." I chose a box of Maltesers. I was dead chuffed, and I've never forgotten It!

There was another shop on that side of the street, but up a bit nearer the Cross, (can't remember the name of it) that sold magazines and newspapers. They also sold sweets, particularly, chocolate clocks, my favourite!

Halberts Garage was on Main Street, right across from the "Hayocks" bus stop at The Cross. I loved the smell of petrol that eminated from that place...could've stood there all day just sniffing it. Weird eh?

I saw my first movie in the Deluxe Picture House, which wasn't far from where we lived on New Street. It was a film about Old Mother Riley having some kind of encounter with a robot. I can't recall much about it . What I do remember best is my feeling of surprise... maybe even a wee bit disappointment when I first saw the inside of the cinema. Rows and rows of seats. My mum had told us we were going to "the matinee" which made me think of a mattress. I fully expected to be watching the picture while sitting on a mattress on the floor.

Around the time I turned five, I moved up the "Tap End" of Stevenston to live with my grannie and grandpa Weaver. They lived on Hawthorn Drive. Their next door neighbours were the Lattas and across the street from them were the Russells. The Robertsons and the Murphys lived in the catty cornered house at the end of the drive facing Greenhead Ave. On Greenhead, lived The Graysons, The Moors, The McKennas, The Maxwells, The Fergusons, The Careys. All these families and many more had kids around my age who would become friends and school chums and were a large part of my growing up years....Stories for another day.....