Okay, here I go. My dad was born in the Borders because his mum's family was from there. She married a Lincolnshire man from Grimsby. She'd had five girls then lost a boy baby to the then necessary in England, but not in Scotland, smallpox vaccine, so when she got pregnant again, she went to her family, in Scotland and had the boy, my father, Arthur, a lovely man.

Mum, Elizabeth Quinn, born and bred in Ayrshire, met dad when he was stationed nearby in ww11, he was RN and I think there was some anxiety going on with the ICI being a potential target. Apparently she decided he was hers right then. After they married, St. John's, Stevenston, 1947, they went to England. My dad's brother in law owned a trawler and dad had worked since age 14 on board, so I think he felt with the post war employment problems at least he'd have a guaranteed job. When my sister, Elise, reached school age, we returned to Stevenston, my mum wanting us to have 'a good, Scottish, education'.

My earliest memory is when we lived in Cleethorpes and there was a flood - I was maybe 2 , 21/2, I remember sitting on the stairs and mum and dad trying to get the water out and mum shooing me back up the stairs every so often - yes, Elise was the good girl, stayed put, I wanted to get into the thick of things! In retrospect, I'm glad I was shooed away. I believe there were many animals drowned and floating down the streets. Another anecdote from that time that I kind of remember , Elise and I went across the street to a sweetie shop to buy something called kaylie, sp?? which was a flavoured sugar. They'd give you a scoop in a poke and you'd lick your finger dip it in and sook it. We crossed the street to go back home and a big burly polis comes up and starts in on us, especially Elise as she was older, because, according to him, we didn't look both ways before crossing. When Elise began to fret I apparently told him to 'leave her alone, you big bully!'. He walked us to the door and told my mum what I 'd said : (   Never lived it down.

My first memory of Stevenston was being  bored, Elise was at school, we lived with my grandparents, John and Elizabeth Quinn, on Glencairn st, and mum worked for Robertsons the butcher / hamcurer in Windmill St, Saltcoats. Gran gave me a sheet of newspaper and scissors to keep me occupied. She came in from the kitchen to find me, head buried, in the corner of the couch. I wouldn't respond to her queries so she thought I'd stabbed myself or worse! I remember her entreaties, wean, whit's wrang, oh my God, whit huv ye done??' When she managed to pull my head out from the cushions she found I'd cut my hair at the forehead. She was so relieved that instead of a thrashing she, and, eventually when I realised I was not on the endangered list, I, had a good laugh! Wait 'till yer mither gets hame -but she found it funny too..maybe the fact that I had no front teeth and newly spiky hair helped? The only people who'd be seen with me in public for a while were my aunt Theresa and her boyfriend, Eric Nothcote. They took me all kinds of places, they weren't abashed at all (hey, she's not our kid)!

Then I was flower girl at my aunt Theresa's wedding. I was four about, maybe 3 +, apparently the entire family was on tenterhooks that I'd gum the whole thing up...tread on the brides veil, pull out a pea shooter....but I behaved impeccably, much to their general relief (and surprise). Where did I get that bad rep?

Second memory said aunt and husband (still residing in the 3 towns, though unfortunately aunt Theresa has passed away), had moved to Hong Kong and sent Elise and me lovely wee Chinese jackets.We were in Pop's and some complete unknown girl snarled at us 'yoose think yer that speshul wi yer fancy jaikets an a' but yer no;' totally out of the blue! No idea who she was but apparently she knew us and had a grudge? If you are reading this W.T.F?? It probably didn't help that we had English accents.

School was fun at least at St. John's, and I was reasonably good at it. I remember walking there in the dark and walking home in the dark and it never being really light all day in winter. I remember my hands being so cold after playtime that washing them in cold water burned, and hoping to get out in the first three or four in line to get the milk bottles that had frozen to an 'ice lolly', the once a year sale of tablet and toffee apples the seasonal pastimes, skipping, scraps, eeleevo, British bulldog, tig..All off the teachers were kind or at least fair, bar Ms. Kelly. In retrospect I think she had health issues but lordy she made us hate school. A funny aspect of that and maybe to do with her problems, she gave us sanitary napkins cut into thirds as pen wipers, (yes, we actually had inkwells that were topped up with water rather than ink regularly.) We, well I, at least had no clue what they were but we always felt special if we got one with a handle. 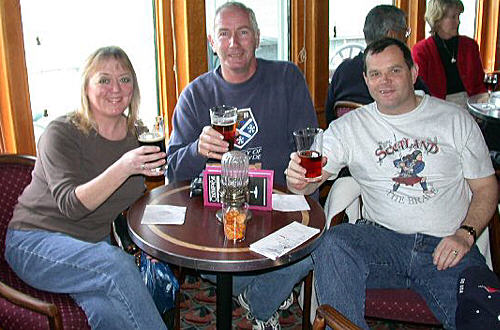 On the Queen Mary at Long Beach California having a wee 3Ts reunion 2001.
Our Morag, Alistair Mann and Martin Murphy All from Stevenston.

I also remember being very in touch with nature, recognising the Ash tree with it's black buds, the sycamores, chestnuts, beeches, rowans etc, taking frog spawn and putting  it in a big jar and when they became frogs putting them in the bath! I loved the rec, usually our route to school, you could name the seasons by it, the bright green bold  new grass that summoned spring, the different birdsong. I was lucky to have an understanding grampa as I was always trailing something home. One time a wee lintie, no idea how it died but I cradled it to my bosom - if you have one at that age - thinking grandpa could maybe fix it. We buried it in solemn ceremony..rabbits, sammy the crow..plants. People living on Hillcrest dr often dumped garden waste over the rec wall, scavenger me and my pals would rummage through and take 'perfectly good' specimens, usually for school but one time I took a sprig of holly home to said grandpa, as usual he humoured me and planted it. It flourished into a large bush...wonder if it's still there? Front garden, 14 Glencairn St. local photogs!

Enough for now - as I said my husband used to say of me, 'ask Morag the time and she'll tell you how to make a watch'.