Kafironda Factory was established in 1965 as a production unit for Anfex, a fuel oil / ammonium nitrate bulk packed ''safe'' explosive for the opencast copper mining industry in Zambia . The factory was located about nine miles from the town of Mufilira on the Kitwe road, a central location on the Zambian Copperbelt. All other explosives and accessories were supplied by African Explosives and Chemical Industries ( A.E&C.I ) a South African based company jointly owned by de Beers and I.C.I.

It had been agreed that a large extension to the factory would be built by A.E.& C.I. to produce nitroglycerine explosives, powders and gelatines, initially based on a master mix supplied by A.E.& C.I.. Construction of Stage 2 as it was known started in 1967/68 (?). The Zambian Government decided during the construction period that as apartheid was the policy of the South African Government on completion of Stage 2, South Africans would not be allowed to run and manage the factory.

Bill Wishart, a senior engineer in Ardeer Factory, was asked to head a team from Ardeer to assist in the commissioning and take over the running of Kafironda Factory.  Recruitment went ahead and in March / April of 1969 Dr Bob Gow and I, Bill Cunningham, went to Zambia as Works Manager and Works Engineer respectively, Bill Wishart was already established as Chief Executive. 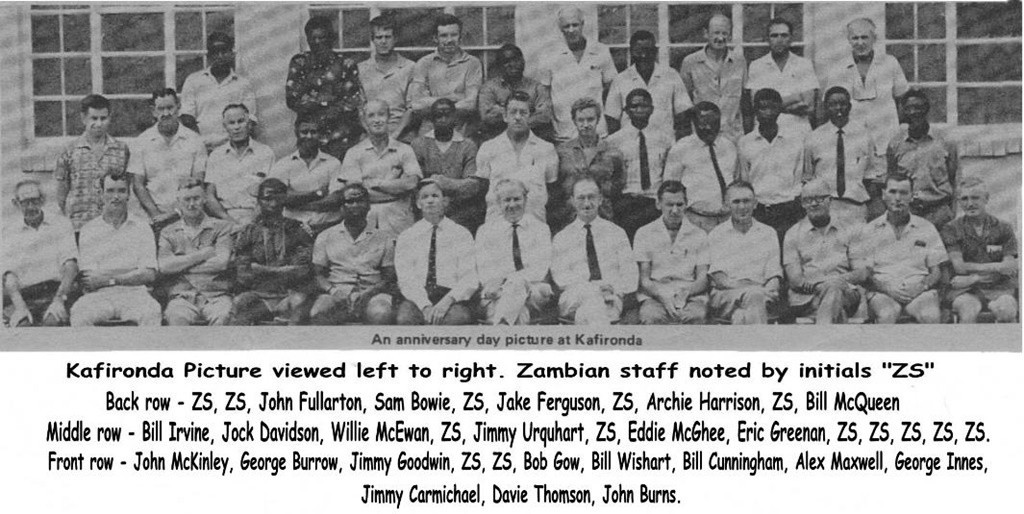 This squad was supplemented with Zambian Supervisors who for the most part underwent training for a few years. Zambian trades personnel were also recruited and again training in an explosive industry was a requirement. Jimmy Carmichael was recruited locally and along with two Zambian Supervisors ran the Anfex Production Unit from its beginning in 1965. Sadly Jimmy Carmichael was killed in the December 1971 explosion which also killed a large number of Zambians, some Kafironda employees, Zambian Railway employees and families of rail workers who had their encampment close by the rail sidings where the explosion occurred.

Other employees at that time were G Fanslau, Commercial Manager, S Smith, Accountant, D Wilson, Laboratory Manager, all recruited in Zambia. A further four Shift Supervisors were seconded from Ardeer Factory during 1970, David Thomson, Willie McEwan, Hugh McKelvie and Sam Cairns. Bill Wishart left Kafironda in 1973 to become the Head of Africa Department, I.C.I., Millbank. Roland Hamilton was seconded as Chief Executive. Stage 3 development, which saw the construction of a nitroglycerine manufacturing unit and the associated acid plant, was completed and commissioned in 1974. During 1973 / 1974 replacement Shift Supervisors, John Thomson, Rab McEwan, Tom Morrison and Frank Smith were seconded as was fitter Tom Scott. Around this time Alistair Miller and Willie Stringer were seconded as assistant Work's Engineer and Laboratory Manager respectively and Paul Chapman as Training Officer .

At this time too secondees from I.C.I . India were recruited. The completion of a detonator assembly unit during this period saw the secondment of Jim Breckenridge from Ardeer. During our time at Kafironda internal staff moves were necessary mainly due to the completion of contracts. In my own case when Dr Gow left I became Works Manager and George Innes the Works Engineer. I became Chief Executive when Roland Hamilton left and Gib FitzGibbon was seconded as Works Manager. I left Kafironda in August 1978 to become the manager at the Roburite Factory near Wigan. I was succeeded by Duncan Kernahan and on Gib FitzGibbon's departure George Burrow became Works Manager, George Innes Production Manager and Bob McEwan was seconded as Works Engineer. Around this time Bill McQueen took over as Commercial Manager. Arthur Randle was seconded as Chief Executive and was the last of the Ardeer secondments. 1984/1985 saw Kafironda with no Ardeer personnel, the factory being managed by an AE&CI appointee some I.C.I India secondees and Zambian staff.