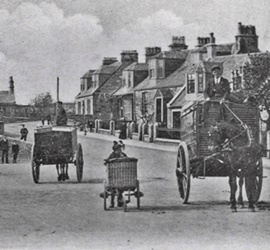 Saltcoats is a sea-port, partly in the parish of Stevenston and partly in that of Ardrossan; 74 miles wsw from Edinburgh, 30 sw from Glasgow, 19 n from Ayr, 14 w by n from Kilmarnock, and one from Ardrossan: eligibly situate on the Firth of Clyde, near to its northern extremity.

The general appearance of this town is far from prepossessing, but its situation and proximity to Ardrossan, the arrival and departure of the trading vessels, and the passing and repassing of the different steam-packets and railway carriages, all contribute to give life to this ancient place; a spirit of improvement is becoming manifest with the inhabitants; and the town, it is expected, will be lighted with gas before this work is published.

About 170 years ago, Salt-cots (then so called) consisted only of a small number of cots or cottages, the inhabitants of which obtained a livelyhood by making salt in kettles; but at the beginning of the last century, a harbour being constructed for the convenience of shipments of coal, the produce of the mines in this neighbourhood, the little hamlet began to assume the semblance of a village; it is but in recent years, however, that it has risen to any note.

During the late war this place possessed an extensive trade, and ship-building was carried on with great spirit; but since the peace its commerce has been much reduced, and it is now nearly confined to the importation of timber, and the exportation of coals to Ireland, in which trade there are sometimes about forty vessels employed. The manufacture of salt here is considerable, and a great number of looms are employed in the weaving of muslins, &c. for the Glasgow and Paisley markets. A branch of the Irvine custom-house transacts the revenue business, and the proprietors of the Ayrshire bank have a branch here; the house in which the business of the latter is transacted, and which is also the residence of the manager Mr. W.B.Orr, is a very handsome building, and an ornamentto Raise st in which it stands. Both at the east and west of the town are extensive chymical works, belonging to Messrs Burns and Son, who manufacture magnesia and epsom salts The principal Inns are the "Saracen's Head", in Harbour street, and the "King's Arms", in Bradshaw street, the former a good posting- house. The Town-house, the foundation of which was laid in 1825, consists of a spacious hall, with two smaller apartments adjoining, and a lock-up for prisoners: the ediface, which is surmounted by a steeple, is a prominent and effective object when approaching the town. A justice court, for the recovery of small debts, sits in this town once a month.

The places of worship are a church of the establishment, two others for the
seccessional body, one for the relief synod, a Gaelic church, and a Baptist meeting- house. The children of the town have the advantage of free, parocial and Sabbath schools, and a library of religious and moral works.There are several benefit societies, which alleviate the suffering and relieve the necessities of the poor; and one of those establishments that must ever aid the impulse of industry and prudence - a savings bank. An annual fair is held on the last Thursday in May. Stevenston is a village in the parish of its name and district of Cunningham - situate one mile north-east of Saltcoats, and two south-west from Kilwinning. It consists chiefly of one street, half a mile in length; and derives its name from Stephen, or "Steven", the son of Richard, who obtained a grant of lands from Richard Morville, constable of Scotland; the latter, then a very celebrated man, died in 1189; under this grant Steven settled here, and gave his patronimic designation to the place. The parish abounds with coal and freestone, of which large quantities are annually shipped.

CONVEYANCE BY WATER
To Lamlash and Brodick, sailing vessels daily.