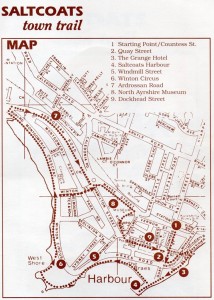 Saltcoats was made a burgh of Barony in 1528. It was then a small cluster of houses round a creek but over the centuries has become an important town of over 13,000 inhabitants. It got its name ("Saltcottis" is one of the early spellings) from the manufacture of salt from the sea water. It was the first place in Britain to manufacture magnesium Sulphate ('Epsom Salts') as a by-product from the salt pans. It became noted for fishing, weaving, shipbuilding and for its seamen and sea captains.

Start at Saltcoats Railway Station and walk towards the sea down Countess Street. On the right is the Town House with its steeple which was erected by public subscription in 1826. Note the small circular 'window' directly above the door. This is the 'window' of the prison cell which still exists with its stone bench and heavy prison door. The artist Sir John Lavery spent part of his boyhood in the second storey house here. The large Town Hall adjoining the Town House was opened on 22nd October 1892. For many years the Hall also served as a cinema. The rear of the building covers the site of the first Saltcoats School used from 1751 to 1877.

Walk down Countess Street. At the crossroads it becomes Quay Street. Take a look back at the crow-stepped building on the corner of Bradshaw Street, and note the tiny square window high up on the gable wall. It is one of the oldest houses in Saltcoats. The street was known in 1717 as High Street as it was part of the turnpike road to Greenock.

In Quay Street look up at the first council house on the left. Clytus House is the site of the home of Captain Betsy Miller. In the 1850s she was probably the only woman sea captain afloat and was named as such in the House of Lords and in the Commons. Captain Betsy Miller died in 1864.

At the end of Quay Street turn left into Harbour Street which soon becomes Hill Street. The Inn on the right (The Grange Hotel) was originally the Saracens Head, the old coaching inn just off the turnpike road. At the crossroads, the Labour Club is on the site of the Landsborough Church built for the famous Dr. Landsborough who was one of the leaders of the "Disruption" in 1843. The church was opened in 1844 and Dr. Lands- borough, who was also a noted botanist, served there until 1855. The Windy-ha is a very old established inn, and across the road is the Saltcoats Free Church. This was originally the Free Church Academy opened in 1858 and closed as a school in 1882 when pupils and staff were transferred to Ardrossan Academy.

Turn down to the right just after the Labour Club. This is Finlay's Brae and was originally the main road into Saltcoats from Stevenston and Ayr.The large building complex on the left is now the British Headquarters of the "Come to God Campaign". It was formerly the Glasgow Mission Coast Home, a convalescent home for Glasgow people first opened in 1866 and greatly enlarged in 1874 and 1888.

At the foot of the brae look to the left. The railway line runs parallel to the course of the first commercial canal in Scotland . It was opened in 1772 to carry coal from the Stevenston Coal Pits to Saltcoats to avoid the tolls on the turnpike road. Turn to the right. You are now on the line of the old waggon way which transported coal from the end of the canal to Saltcoats Harbour.

Look over the sea wall. You will see the old creek where smugglers carrying tobacco, rum, brandy, etc. Landed their goods. You will now pass behind the old Saracen's Head Inn and the open space on the right is the site of the old Saltpans and the shipbuilding yards. This is known as The Braes. Go straight along the old Quay. Note the break in the wall with steps down to the rocks - another way for smugglers to bring in their contraband.

The Quay dates from 1686 and was built for the coal and salt industries. It was badly damaged by a storm in January 1739 but the record says that it was rebuilt in two weeks by ten masons who were paid ten pence (4p) and a whisky per day. It was enlarged in 1797 and bought by the Town Council in 1914. The building was an old storehouse. Old pictures of Saltcoats show two houses. The larger one was a watch house, used by Customs men, and then an Inn, but was demolished in 1924.

Go up to the tower and enjoy the view across to Arran and southwards towards Irvine , Troon, Prestwick, Ayr, etc. and to Ailsa Craig on the horizon.

Return to The Braes and walk along the promenade. The sea wall was built in 1924 and modernised in 1988. The hanging signs over the car park represents salt crystals in acknowledgement of the old salt industry. Note the anchor representing the shipbuilding the took place on The Braes, the unusual sundial, and the little shelter with a ship weather vane.

At the end of The Braes you reach Windmill Street. The ruined base of the old Windmill still lies behind No 51. The date is unknown - even the oldest maps show it as a ruin.

The Beach Pavilion, now a leisure centre, was an important cartography centre during the 1939-45 war providing maps for the invasion of the continent. It is on the site of the North Salt Pans belonging to the Earl of Eglinton. The extensive concrete landscaping here covers the old sea-bathing station. Note the coloured patterns in the concrete, again representing the salt crystals.

Go along Winton Circus, and for a shorter walk turn right just after the Melbourne Park into Winton Street leading to the War Memorial. Those who would like a longer walk should continue along the promenade (Montgomerie Crescent) to the Stanley Burn, the boundary with Ardrossan, then turn back along Ardrossan Road. The red sandstone building on the left is a Strathclyde Region Office housing the Social Work department upstairs and the Registrar downstairs. This is the venue of all civil marriages in the Three Towns. Almost opposite is the South Beach Church built in 1867 for the Saltcoats Free Gaelic Church. This is now the Baptist Church.

Continuing along Ardrossan Road pass Our Lady Star of the Sea Roman Catholic Church built in 1856 and recently modernised. The Catholics had previously met in a hall in Bradshaw Street it is at the War Memorial, that bears the names of the dead of two world wars, that you meet the route of the shorter walk.

Take Manse Street, the road to the left of the Safeway Store. On the left at the traffic lights is the pedestrian path to the Saltcoats Public Library which is the site of the old Manse. On the right is the Salvation Army Hall formerly the hall for the old Ardrossan Parish Church which now houses the North Ayrshire Museum - our next port of call.

This old church was the third Parish Church of Ardrossan. The first was on the Castle Hill at Ardrossan built about 1200, and damaged by a storm in 1695. A new church was built at the Stanley Clachan in Ardrossan in 1697 but this was taken down and rebuilt in Saltcoats in 1744. This was also storm damaged in 1773 and the present much enlarged building opened in 1774. It was closed as a church in 1908 when the new Parish Church on a fourth site in Caledonia Road. In 1958 the 1744 church was re-opened as a museum. Take a good look at the museum - you will find many items of local interest including relics of the early years of the Three Towns and its coal and salt industries.

Resume the walk by returning to Manse Street and then turn right into Chapelwell Street. The church which sits on the corner is Erskine Church built in 1866 for the United Presbyterians - a union of the old Burgher and Anti-Burgher Kirks (the street gets its name from old wells associated with a very early pre-reformation Chapel which was sited somewhere near here no one knows precisely where).

At the crossroads turn left into Dockhead Street. The name is self evident because the street backs on to the Braes where all the marine activity took place in the eighteenth century. The church on the left side is the Landsborough and Trinity Church built in 1899 as Trinity Church and whose congregation joined with that of Landsborough Church in 1968. The street is now pedestrianised but was originally the main thoroughfare as a continuation of the turnpike road. The narrow part of the street still has a number of very early buildings. At the crossroads, turn left, and you are back to the beginning of the walk.