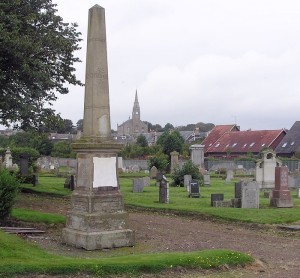 Around about 1845, Stevenston was visited by a plague in the form of Asiatic cholera or, as it was sometimes called, pestilential cholera. As has been previously stated, and in all, over six hundred people died in Stevenston from the disease over a period of years. It first visited the United Kingdom in 1832 being brought to this country, it is believed, by soldiers who had served in India. The disease was ushered in by an attack of enteritis, retching, deafness and blindness, which lasted from six to seven hours before the patient succumbed.

The disease was produced by some particular poison which could be transmitted through the air, by water, or communicated by one individual to another. Sanitary arrangements in Stevenston village at this period were non-existent. It is to the credit of the Parochial Board that certain of their number took it upon themselves to visit the various wells in the town from which the townspeople drew their drinking water and took the necessary steps to ensure that they were not contaminated with either decayed vegetables or animal matter. In some instances they found byres and stables contiguous to the drinking wells and ordered their removal. One party was prosecuted for throwing into the burn a chaff bed on which a member of the family had died of cholera. Incidently, the burn at this period was open at 'Coorouden' or New Street as we know it today.

A young doctor was brought from Glasgow to help combat the epidemic, but with the lack of proper sanitary arrangements it was rather difficult. However, the best was done and in some instances tenants were forbidden to keep cattle at the front or the back of dwellings. nearly all the people, and they comprised weavers, colliers and labourers, who succumbed to the cholera were interred together in the common ground in the Coorouden cemetery. Later, in 1871, the workmen at Ardeer Ironworks erected a memorial to the memory and to all who had to be interred in common ground up till that time. The monument takes the form of an obelisk and is situated at the top of the main drive in the Coorouden cemetery. The inscription reads:

In this Plot  Rest
Six Hundred and Six of the Inhabitants of Stevenston
Who died between 5th Aug. 1845 and April 1871
To Their Memory
The Workers of Ardeer Ironworks
Dedicate this Monument