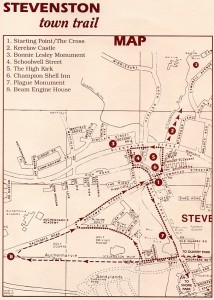 The walk starts at Stevenston Cross at the foot of Main Street in the middle of Stevenston. Take the footpath (not suitable for wheelchairs) which runs beside the burn. On the hill across the burn is the old cemetery with the High Kirk towering above - but more of that later. Between the path and the burn is the cap over the Deep Shank Pit, the first deep pit in the district sunk in 1678. Along here came the lade (water channel) for the 19th century corn mill that gave its name to Mill Hill. There are two burns feeding the lade. The one on the left is Quarrel Burn, that on the right is the Stevenston Burn.

It is a steep path up to Glencairn Street, the main A78 road. Cross the road by the pedestrian crossing and turn left (towards Saltcoats). Just before the bridge, take the rough path on the right which descends to the side of Stevenston Burn and leads, in about half a mile, to the ruins of Kerlaw Castle. It is the former home of the Cunninghames of Glencairn and "one of the ruins Cromwell knocked about a bit". His troops took masonry from Kerlaw for repair work in Ayr, but it was the Montgomeries of Eglinton who were responsible for sacking it and burning it during their long running feud with the Cunninghames over which family should control North Ayrshire.

Those who prefer a shorter walk can continue along Glencairn Street to see the Bonnie Lesley Monument which is up the steps on the right. Bonnie Lesley was Miss Lesley Baillie who was born in Stevenston in 1768 it is possible to see Mayville, the house where she was born, by looking across the street through the space between the garage buildings and the first bungalow. Burns met her in 1792 and described her to a friend as "the most beautiful, most elegant woman in the world". She inspired one or two of his love poems. It didn't go to her head, though, and she married Robert Cumming from Edinburgh.

The monument was originally put up by her father as a memorial to her mother who died in 1784, and was situated near Kerlaw Mains Farm. Lesley's name was added in 1929 when the monument was re-erected on its present site by members of the Burns Federation.

Cross the road and walk back towards Mayville Street and then turn into Schoolwell Street where there are several interesting old buildings, now listed, including No.21, the Manse, the oldest part of which dates back to 1700, and the High Kirk. As its name suggests, the street had a school which was used until 1872 when the provision of education became the responsibility of the School Board. The well was filled in within living memory.

The High Kirk in its prominent position above the Stevenston Burn was dedicated in 1833. It replaced a church which was built in 1670. That building, which had replaced a still earlier one, was found to be too small for the growing congregation in spite of the addition of an aisle in 1744.

Fixed to the sill outside the belfry window is a sundial inscribed D. L. in memory of Doctor David Landsborough who became minister of the parish in 1811. As well as being a hard working and devoted minister, he was a famous naturalist. He was one of the leaders of the Disruption in 1843 when many ministers who objected to the political constraints of the Established Church broke away to form the Free Church. Dr. Lands-borough left Stevenston High Kirk and set up the Free Church of Scotland in neighbouring Saltcoats.

Continuing down Schoolwell Street towards the Cross, notice on the left, the Champion Shell Inn, another interesting, traditional Scottish Building with forestairs built to suit the slope of the hill on which it stands. It is the oldest inn in Stevenston. Cross at the pedestrian crossing, and go down New Street which at one time was called the Coorodden for this is the routethat cattle belonging to the residents of Stevenston were driven down to the town's common grazing on the area of grassy dunes by the foreshore.On the left pass the shopping centre with the Stevenston branch of Cunninghame District Library. Next is the Masonic Hall and then the former Free Church now a building contractor's establishment

Cross the road to the old cemetery to find the so called Plague Monument. It was put up by the workers of Ardeer Ironworks in 1871 as a memorial to six hundred and six victims, not of the plague, but of the cholera epidemics that swept through Stevenston (and other industrial towns of Britain) in the mid 19th century. The poor housing conditions and the lack of sanitation endured by working people led to the rapid spread of the disease. There were two very severe outbreaks in 1849 and 1854. During them Dr. Landsborough ministered to the dying until he, too, succumbed to the disease in September 1854. Many of those who died were hastily buried in common graves.

Returning to New Street, on the left pass the school and then Livingstone Church, built in 1887 when the original Free Church became too small. It is named after Reverend John Livingstone who was minister in charge when it was built. It became a United Free Church in 1900. The pipe organ purchased in 1944 was originally presented to the Highlander's Memorial Church in Glasgow by Sir Harry Lauder in memory of his son John.

On the right, at the junction with Moorpark Road West is the War Memorial Institute which became the Burgh Chambers when Stevenston achieved burgh status in 1952. At the junction with Station Road is Caley Court, a sheltered housing development built on the site of the former Caledonian Railway Station.

Moorpark Road East leads to Ardeer quarry Park, where there was once a very productive sandstone quarry. The whole Ardeer area bears the marks of former industry such as lime-burning and coal-mining. There were at one time extensive iron works here and in 1870 Alfred Nobel founded the British Dynamite Company which started production at Ardeer in 1873.

Station Road continues to the Railway Station and the Shore Park but the walk takes you along Moorpark Road West towards Auchenharvie Park. In the middle of Auchenharvie Golf Course in the Northern portion of the Park, stand the ruins of the Beam Engine House. A Newcomen engine was first installed in 1719 in an attempt to keep the coal workings below free water. It was the second such engine to be installed in Scotland and was not very efficient. The mining of the Stevenston Coalfield on a commercial scale began shortly after 1678 when Robert Cunninghame succeeded to the Auchenharvie estate. As well developing coal mines, he was responsible for building new saltpans and a harbour at Saltcoats, from which coal could be exported to Ireland, and a canal on which coal could be transported from the pit-heads to the harbour.

From the Beam Engine House you will see Auchenharvie Academy built on the site of Seabank House, the home of Robert Cunninghame and his successors. Having seen the Engine House, you can return to the Cross the way you came, or complete a circular route via Hillside Street and Boglemart Street.