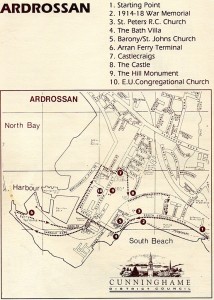 The Town Trail starts on the promenade at the Stanley Burn, which is the boundary of the town. Facing the sea front is St. Andrews Episcopal Church, opened in 1874 and adjacent is St. Peters R. C. School, formerly Ardrossan Academy.

Walking along the promenade notice the large mansions of the early 1800's, built for the business men and merchants of that era. One in particular, the Verona Fathers house No. 8, was originally the home of Hugh Hogarth the shipping magnate and founder of the Baron Shipping Line. Next door to No. 8 stands the Church of Scotland retirement home.

Further along is the 1914 - 1918 war memorial designed by Dr. Macgregor Chalmers, a Glasgow architect and his successor, Mr J. Jeffry Waddell who finished the work upon Dr. Chalmers' untimely death. The memorial, where the names of the fallen of the town are recorded, was sculpted by Mr. James A. Young of Glasgow and its erection was supervised by ex Bailie John Inglis, a builder from Ardrossan. Depicted in the stonework are some personalities from Scottish History.

Across the road at the foot of the castle stands St Peters R.C. Church. This fine brick red building is one of the finest examples of modern Church Building. Its architect, Jack Coia won an award for its design. The church was built in 1938 and stands on the site of the Earl of Eglinton's former mansion The Pavilion which was built in 1831.

At the end of the promenade surrounded by a modern housing complex for the elderly stands Bath Villa. This building along with another (since demolished) was formerly a hydropathic bathing facility built by the 12th Earl of Eglinton in 1807 where hot and cold, fresh and salt bathing was provided. Accommodation was also provided for a few guests.

Across the road stands the Barony/St. Johns Church which became a United charge in 1988. The church was built in 1844 as the "New Parish Church" and after the reunion of the Church of Scotland it became known as the "Barony Church of Scotland".

Walking along Princes Street, just before the level crossing, a road leads down To Battery Point and the Inches where the old "Artillery Volunteers" in the Late 1800's fired off their practice guns to sea. The Inches yard was the site of Christie's yard complex where railway sleepers were produced and stored The complex was gutted by a huge fire in 1913 which caused the firm to cease manufacture. The Inches was then occupied by Ardrossan Ship-building Co. who built vessels up to 6,000 tons from 1920 - 30 when the yard closed down due to the Depression. During the 39-45 war the Inches was the site of an Air Ministry factory for canning aviation petrol and managed by the Shell Mex.

At the level crossing the former town station is now a platform halt. Opposite stands the Bank of Scotland which was originally the building of the City of Glasgow Bank and then the Union Bank before its present owners took over.

At the town cross turn left at the Masonic Hall into Harbour Road and go to the Arran Ferry Terminal and Lighthouse pier. The terminal is also the site of the old dock gate which led into the original dock and shipyard before the dock was infilled. The lighthouse pier was also the site of the R.N.L.I lifeboat house. The R.N.L.I. lifeboat was manned mostly by dockworkers.The first boat "The Fair Maid of Perth" rescued 53 people between 1870 -1892, and the total rescued over 60 years was 172.

The car park was the site of the Christie Saw Mills where sleepers were cut and soaked in creosote. The timber was brought in from the Baltic and was then used in Britain as well as being sent far as India, Africa and the Middle East for the laying of the world's railway networks. N.B. A full history of the harbour and shipyard is available in two publications by the local History Group from the local Library.

Return from the harbour by the Dock Road. The Eglinton Dock is on the left. In the heyday of the harbour this was a very busy dock being the first deep water port for ships coming from America.

The adjoining Montgomerie Pier was a dual purpose pier. As well as being a railway terminus for passengers to the Isle of Man, Arran and Ireland, the outside berth was used by Shell Mex Company to berth oil tankers up to 11,000 tons. Operations at Ardrossan closed in 1986.

Walking up to the cross turn left at the resources Centre formerly the Bank of Scotland, past the library on the right and the Eglinton Hotel on the left. It was originally built by the 12th Earl of Eglinton in 1813 at a cost of £10,000 as a commercial hotel when Ardrossan was potentially the foremost port on the Clyde.

Turning right past the library continue up Montgomerie Street which was at one time a street of large houses for the professional and business people of the early town. The site of the Coastguard Centre adjacent to the Fire Station used to contain a large mansionKilmahew House which was built by John Barr, the first provost of the town. Although there was initial resistance to the awarding of Burgh status, when it became a Burgh in 1846, John Barr became Provost and stayed in office for 37 years continuously. The house later

became the Burgh Chambers until it was demolished in 1978. The bus garage on the left side of the street was the site of the Caledonian Railway Station until it was closed in 1968. In its prime. Ardrossan was proud of two railway systems running to Glasgow; the Glasgow and South Western (GSW) and the Caledonian which later merged with the LMS.

Turning right into Barr Street, look across Glasgow Street to the Civic Centre or Castlecraigs. This turreted building was originally known as Graham's Castle having been built in 1851 by Duncan Graham, a gentleman from the North of Scotland. It was subsequently owned by Archibald Russell and his heirs from 1893 - 1920 when it was bought by Ardrossan Dockyard Co. They built on a recreation hall and tennis courts. In 1927 the Masons bought the complex and let out the ancillary rooms and tennis courts until the 1939 - 45 war when the Navy requisitioned Castlecraigs as a barracks.

Before leaving Barr Street, notice the site on the left hand corner with Montgomerie Street where the St. John's Church of Scotland once stood. This church was built in 1859 as the Free Church before joining the Church of Scotland in 1929.

Crossing Glasgow Street pass by the Indoor Bowling Centre to Hill Place, thence up to Castle Hill by the side of the Church of Nazarene, which was formerly the Park Church of Scotland.

On the North of the hill the remains of the foundation of the first Ardrossan Parish Church and graveyard are visible. The church dates from pre-reformation times and is probably as old as the castle itself. An early stone sarcophagus from the ruins can be seen in the North Ayrshire Museum in Saltcoats. The church was used by the Reformed Discipline until it was blown down by a hurricane in 1695.

A new church was erected approximately 1 mile to the N.E., on the area, at present a children's playground, on Stanley Road and near the Clachan of Stanley which was sited at the corner of Millglen Road and Stanley Road. The church was taken down in 1744 and rebuilt in Saltcoats.

The castle, now a ruin, dates back to about 1150. The Norman knight, Simon de Morville passed it on to the de Barclay Family. In the early 13th century the lands came to Arthur de Ardrossan, after which a succession of knights became heirs.

During the War of Independence the ownership of the castle was in contention; The de Ardrossans were thought to be backing both sides. The king gave the lands of Ardrossan to various English families such as the de Johns, John Balliol and Sir William Latimer; but in 1305 Hugh de Ardrossan regained the Barony of Ardrossan. After 1484 the lands of Ardrossan passed to the Montgomeries (Eglintons) who kept the castle until (it is alleged) Cromwell's troops sacked and destroyed it during their punitive campaign 1648 - 1650 when the Eglintons took refuge in Sma' Cumbrae Castle.

N.B. The Eglintons came back to Ardrossan to live in about 1813 when Lord Eglinton built The Pavilion mansion as a summer residence on the site where St.Peter's Church now stands. The Pavilion was demolished in the early 1930's

The monument on the hill was erected by public subscription to Dr. Macfadzean, who died in 1849. The Doctor was a greatly respected philanthropist and tireless physician. He took over the Bath Complex in Princes Street from the Earl of Eglinton in 1833 and ran it till his death in 1849.

As well as entertaining he also catered for the poor and unfortunates of the town, never charging them any money for the baths and never turning away anyone in need of a bed. He was also instrumental in pressing the authorities to install a piped water supply to the houses of the town. In 1860 this was completed, thus ensuring a clean supply of water, a welcome improvement from the artesian pumps which were very often the cause of cholera and other diseases of the 19th century.

The countryside around the town was all owned by the Eglintons. The 10th Earl was a notable improver of agriculture and had a system of long dykes to contain his cattle and crops. He met his death on the beach at Burnfoot at the hands of a Saltcoats poacher named Mungo Campbell when Eglinton challenged him About a hare and demanded his gun.

(The intriguing and ghastly tale of how Mungo Campbell met his sticky end can be found at Ardrossan Library).

From the viewpoint of the hill look down into Glasgow Street at the E.U. Congregational Church. This finely built Church was erected in 1903 in the playground of the old infants school which is now used as the Church Hall. Go down the hill in an eastward direction, cross the railway footbridge past the bowling green then turn right to arrive back at the promenade.